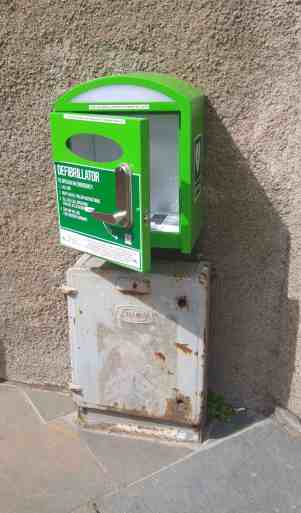 Oldmeldrum and mid Formartine Councillor Paul Johnston, described the theft of a defibrillator from its box in the Town Square in Oldmeldrum, as ” crass utter stupidity”

The defibrillator was removed at some point between Wednesday and Thursday lunchtime, when a member of the public reported it missing.  Community council and members of the public have carried out a search locally, including bins, to find the device if it had been discarded.

” This is a completely senseless act as it is of no value to anyone other than as a piece of life saving equipment.  It needs to be kept in its recharging box, which is attached to the wall near Oldmeldrum Square.  It’s useless otherwise.” Said Paul

” The community raised thousands of pounds for the provision of defibrillators to save lives.  This is a huge slap in the face for them and we are all rightLy angry at the crass utter stupidity of the theft.”

“If in an emergency, this was needed, valuable time would be lost be cause of death as of this kind of equipment.  This is an incredibly serious act.  I strongly urge everyone who might have information or knows of its whereabouts to help in the return of the device” said Councillor Johnston

The defibrillators are all recorded by the Scottish ambulance service in case of emergency to direct people to the nearest life saving defibrillators site.  Paul indicated that it should be a priority to get its return or a replacement.

Police Scotland are understood to be investigating local CCTV footage to see if it can reveal any information on when it was removed and by whom.

Works in the community END_OF_DOCUMENT_TOKEN_TO_BE_REPLACED
This entry was posted on Friday, July 8th, 2016 at 2:55 pm and posted in NEWS. You can follow any responses to this entry through the RSS 2.0 feed.
« COUNCIL ANNOUNCES IT IS TO WASTE MILLIONS
COUNCILLORS WELCOME VOTE OF CONFIDENCE IN ABERDEEN BAY WINDFARM »