Priorities identified by Aberdeenshire’s Democratic Independent and Green Group (DIGG) councillors last November have been included in their Council’s 2017/18 revenue budget passed yesterday (Thursday 9 February).
The 2017/18 revenue budget comes into effect at the start of the new financial year in April.
“The DIGG is very pleased to have secured additional funding for some key priorities,” said Cllr Martin Ford.

In Aberdeenshire Council’s revenue budget process (itself first suggested by the DIGG), at the November full council meeting the various councillor groups in the Council put forward draft budget proposals for the following year’s revenue budget. Last November, the DIGG identified active travel (cycling and walking), youth work and traffic calming as priorities for Council investment in the 2017/18 revenue budget. The DIGG also suggested additional investment in renewable energy (exclusively or mainly solar PV on Council properties) to reduce the Council’s greenhouse gas emissions while generating a small net income of £10,000 p.a. (ie. the surplus after meeting financing costs). And the DIGG argued the Council should set £200,000 aside for capacity building in the third sector and communities in preparation for the Council removing or transferring service provision (since, overall, Council budget cuts were unavoidable). 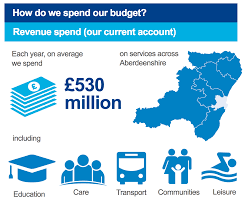 All five of these DIGG proposals were included in the Aberdeenshire Partnership administration’s budget passed yesterday with DIGG support. Additional funding of £150,000 has been allocated for active travel in 2017/18. A new budget line has been created for ‘youth work’ (with £100,000 allocated) and a new budget line for ‘traffic calming and speeding reduction’ (£150,000 allocated). The new budget provision for capacity building in communities – £200,000 – is as put forward by the DIGG in the DIGG draft budget proposals last November. An additional income of £10,000 is shown in the 2017/18 revenue budget against ‘renewable energy’, to be secured by further investment in solar panels on Council buildings as the DIGG proposed.
“The money for youth work, traffic calming and speeding reduction as well as cycling and walking should benefit residents all over Aberdeenshire,” said Cllr Paul Johnston.

Works in the community END_OF_DOCUMENT_TOKEN_TO_BE_REPLACED
This entry was posted on Saturday, February 11th, 2017 at 1:10 pm and posted in NEWS. You can follow any responses to this entry through the RSS 2.0 feed.
« DR SEUSS 1941
BOTTLE DEPOSIT TAKES ONE STEP CLOSER IN SCOTLAND WITH SUPPORT FROM COCA COLA SAYS A LEADING ABERDEENSHIRE COUNCILLOR. »